More from the defunct course lecturette series, this from Hobbits and Heroes at DU: “Love in War.” I believe at that point we had read through The Return of the King and of course various and sundry essays and influential works and things.   ~Jenn

“I would not see a thing that is high and excellent cast away needlessly.”

“Nor would I…therefore I say to you, lady: Stay!  For you have no errand to the South.”

“Neither have those others who go with thee.  They go only because they would not be parted from thee—because they love thee.”

The cliché “love makes the world go ‘round” is absolutely true in LOTR.  More than being mythologically posing representatives, the “good-guys” in the epic act out of passion and love, which is inevitably how they win the War of the Ring.  Friends, servants, and lovers stick together through the intensely harsh circumstances in the last book, and the many love-ties are the foundations for victory and the basis for the New Age of Middle-earth.

Arwen and Aragorn:  Though we get to know Aragorn pretty well since his appearance as Strider way back in Bree, we barely see Arwen at all until their story appears in the Appendices.  She is described in detail, her beauty (and apparent wisdom) a beacon to Aragorn through all he endures.  Arwen’s presence is in his mind, particularly before he takes off to the Paths of the Dead:  mainly because he may never exit said place of terror, but also because he has to let Eowyn down gently before he does so.  Arwen’s Galadriel-like bestowing of gifts at the end make her even more what she really is through the epic: a prize that Aragorn (and everybody, since she is now Queen) wins by his victory.  Even earlier in Lothlorien, when Galadriel discusses what Aragorn’s gift is to be: he (and she) speak of Arwen.  She, indeed, is the gift that Galadriel (and Elrond) give, to be collected as long as Aragorn survives to be King.

Of course we realize that Eowyn is in love with Aragorn (some of us wish he’d end up with her instead of Arwen, but oh well), and it is just before Aragorn leaves for the Paths of the Dead that he actually turns her down, much to everyone’s chagrin:

“Few other griefs amid the ill chances of this world have more bitterness and shame for a man’s heart than to behold the love of a lady so fair and brave that cannot be returned.”

In Return of the King, it is made plain that Eowyn really loves Aragorn because of his title and valor—more of a love of glory than a true personal love.  When in the House of Healing in Gondor, she meets and chills out with Faramir, who awakes in her warmth and real love.  Remember, everyone describes Eowyn throughout as the “cold maiden of the Rohirrim,” or something similar, always describing her as cold, aloof.  When Faramir confesses his love, she is transformed:

Then the heart of Eowyn changed, or else at last she understood it.  And suddenly her winter passed, and the sun shone on her.

Talk about “warm and fuzzy.” 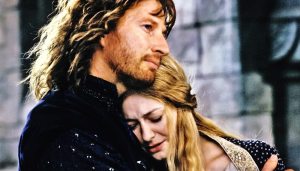 Two races, both alike in dignity, when put into an adventure, learn love and understanding.  Gimli’s transformation happens in Lorien, when the love of the Lady Galadriel moves him to most un-Dwarf-like behavior.  Legolas and Gimli both have a friendly contest of how many orc-heads each has hewed, which is so endearing it’s some of the best (and necessary) bits of comic relief we get in the series of epic battles  in RoTK.  They both make each other a promise: that if both survive and Suron is indeed destroyed, then Gimli will show Legolas through the great caves behind Helm’s Deep, and Legolas will in turn lead Gimli through Fangorn.  They are both still of their own kind, yet when confronted with the unknown, each is a comfort to the other.  We also find out in the Appendices that Gimli eventually follows Legolas into the eternal Elfhome lands.  Like Pippin and Merry in Elrond’s Council, or Sam trailing Frodo, Gimli and Legolas are so attached that Legolas won’t go into eternity without Gimli still at his side.

I have been calling Sam Frodo’s “caddie” through the past couple of weeks.  It is in this “master/servant” relationship that the love between Frodo and Sam develops.  A combination of the Victorian era’s ideal of “romantic friendship” and the relationship between an officer and attendant in early war shows these two with arguably the strongest love-bond in the story.  Contemporary readers (and film-watchers) have been mystified by this relationship, as Sam continues to call Frodo “master” yet the physical tenderness between them (lying with head in lap, holding hands, even a chaste forehead-kiss) adds up to apparent homosexuality.  But what contemporary folks forget (especially Americans with our Puritanical morals) is that there is such a thing as deep love without sexuality.  Back “in the day,” when men went to school and women didn’t (or went to different schools), the close friendships one made in “high school” and at University would be of one’s own sex.  Holmes and Watson are another famous pair of this “romantic friendship” ideal, also jeered at by modern folks.  But marriage, even as late as the turn of the last century (and even later, let’s be honest), was purely an economical arrangement, not having much to do with mutual partnership and love. Women were not really in society (witness the females in LOTR as per Week 7’s discussions), and so close bonds between young people of mutual interests would nearly always be between men.  When these men would decide to marry, they were lucky to find a woman of good quality who they also loved.  You go, Faramir!

When it comes to the love bonds between the LOTR characters, we have to remember the time periods involved, not only the pseudo-medieval setting of the story itself, but also of the times in which Tolkien wrote.  The troubadour-sung Chivalric Romance is the epitome of Arwen and Aragorn, the eons-long battle between different peoples is given hope in the undying friendship of Legolas and Gimli, and Frodo and Sam represent utter loyalty, even to the depths of Orodruin.  What about Faramir and Eowyn?  There’s nothing like a happy ending for two heroic types who really deserve it!