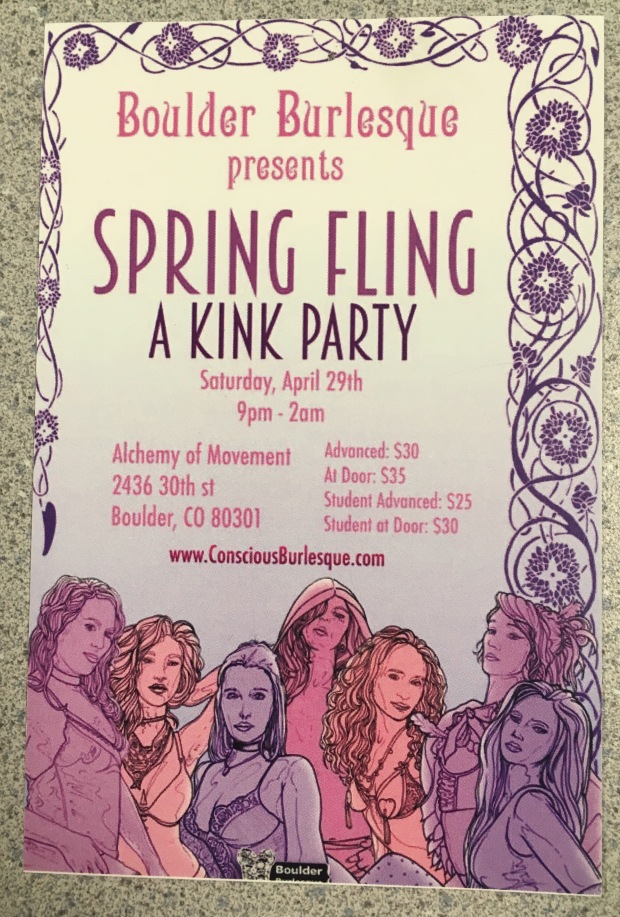 It’s not just a burlesque performance (though that’s what I’m doing there), but a kink party, so it’s 21+ and lots is going on besides booty-shakin. Should be a fun time!

(anyway, this is why I’m not blogging frequently at the mo’.)

…seriously though, it’s because of my busy life! Wanna hear what I’ve been up to, instead of blogging here?

Well I have been contributing to another blog, under a pen name, with my significant other. Some really great personal memoir type essays, and it’s writing I’m proud of. Not going to share it here publicly, but if you know me well personally, ask me and I’ll give you the link to that.

The FRCC comp 1 students have just handed in their research papers, and the Comp 2 students have just finished their rough drafts of theirs. Topics for these include: Farming, steroid abuse, censorship in music, arts in the schools, the innovation of the electric guitar, police discretion, free speech on college campuses, trans rights and health, immigration, damage of video games and social media on youth, and the cruelty of zoos. Lots of important things, my students are writing about.

My Regis Capstone student is sending me big chunks of her high-Fantasy novel, set in a world where the sun is destructive and there’s all kinds of well written political intrigue and a telepathic power that certain people possess, and really cool ninja-like warriors, and. It’s a good piece, and I can’t wait till it’s published and I can share it with you. I also have seven Capstone students in DU’s seminar course who are entering proposals and getting their big projects nearly to the midterm point. Some really interesting projects there, too.

But. You can see why I haven’t had much time to write here, lovely lurkers.

In performance news, I have performed burlesque for Bronze Fox just this Wednesday, and will be appearing onstage for Boulder Burlesque’s upcoming Spring Fling Kink party. I’m having a heckuva lot of fun doing this particular movement hobby, and if you’re interested in keeping up with that stuff, follow Valkyrie Rose on Facebook.

I’ll write to you again on the other side of grading. When will that be? Who knows…

Here’s the final installment, lovely lurkers. I’d love to hear your thoughts in the comments on any of the three installments.   ~jenn

But suppose we help Brecht and discover why his alienation fails while the techniques of a librarian bring large, loud audiences to hear stories every week. We have discussed in detail what drama is: two or more performers on the stage, within their matrix, acting. The audience sees who and where the performers are, but has to interpret the goings-on for themselves. That is, they supply the “why.” In storytelling, the “why” is given; the narrator explains exactly the goings-on, and tells us up front whether each character is a villain or not, or if what the hero  does is praiseworthy. The audience here has to imagine the what the characters, costumes, and scenario look like, since there is only one voice and body to supply them all. That is, they supply the “who” and “where.” In drama, we don’t know which character is telling the truth. In storytelling, we can always believe the narrator. So drama, therefore, shows plot purely by characters’ relationships, and storytelling centers on plot and leaves the intimate details of relationships up to the viewer. These are two different ways of telling a story, two polar performances. What would happen if we combined the two?

In October of this year (1995), I teamed up with some musician friends of mine to put on a storytelling show for Halloween. This time, instead of it being just me telling and them accompanying, we brought in two other storytellers and an actor to join me in the show. Most of the pieces were merely each one of us taking turns telling a spooky piece by ourselves with musical backup. But three of the pieces used all four of us to create a performance style which I think combines acting and storytelling in a harmony which worked well for our audiences.

Here is the way it worked:I’ll use the first one of these pieces, “Dancing Bones,” as an example. Daune Greene, our beloved narrator, stepped onto the stage and sat on a stool with a microphone placed in front. She began the tale: “Clarence Kelly was dead. Everyone was happy.” As she continued her narration, and mentioned Clarence’s widow, I entered, in the costume for the widow. I said no lines, but did actions as I heard them coming from the narrator. There was another actor portraying my dead husband, and another for the courting fiddler who comes in later. We said no lines unless Daune’s narrative included it: that is, we had short snatches of dialogue, but constantly interspersed with her narration. We even, for comedic effect, sometimes reacted to the narration itself, such as when she said that the widow might lose her insurance money if Clarence refused to stay dead, I stopped the action and looked towards her, in a “say-it-isn’t-so” manner. This further lowered whatever fourth wall 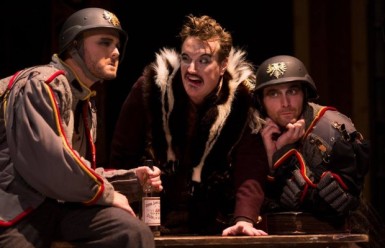 UMKC Theatre shows the masks of the stylized acting of Brecht. Sorry but I couldn’t find a picture from that production I described for the life of me…

was there, and distanced the audience emotionally, so they didn’t empathize with any character, since the narrator was onstage, a character almost in her own right–almost a quarterback’s role in American football. This kind of performance (which I have both done and seen often) is not strictly drama, nor is it pure storytelling. The presence of the narrator as a character makes it storytelling, but having one actor per character engaging in dialogue makes it drama. Perhaps we should call it Storyacting or Dramatelling, because it combines both mediums effectively.

Brecht’s problem, as I see it, is that he was trying to map dramatic acting onto storytelling, the one on top of the other, which doesn’t work. He should have combined the two instead, not expecting actors to be both narrator and character at once, but one or the other–having actors to portray both. In fact, he actually does this very thing in his play Caucasian Chalk Circle. There is a minstrel-like character who inserts narrative into the action as he strums his guitar, much like our Halloween production. Perhaps this play is the exception to the rule that Brecht failed in effectively combining acting and storytelling into one whole.

(Note to any Comp students reading this: I have zero idea what style citations these are in. I’m assuming it’s an old version of MLA.)

Let us consider this for a moment. In my last paper on this subject, I found no distinguishable difference between Brechtian acting and storytelling as a practice. What, then, is the one characteristic most obviously distinct between the two? There is only one performer in storytelling.

This may seem simple, but it makes all the difference. In Brecht, the presence of the narrator is in the set, in the form of commenting projections or bright lighting; or in the text itself: the inclusion of songs, or having the characters drawn in a more stylized than realistic way; or in the acting, with actors broadening their style, or breaking the fourth wall. Yet, as much as all these things are meant to emotionally alienate an audience, when someone sees a character in front of them, not on the page but in the flesh, a separate person from other characters, they will see them as that character, and even empathize automatically. And, since the narrator is not a character in itself but in all the characters or their environment, this device for distancing does not work as well because it is not as obvious as having an actual narrator character interrupting or adding the commentary. No matter how much style and set may try to reach only an audience’s intellect, audiences will attempt to suspend their disbelief anyway and have an emotional reaction, and and then wonder why the character was so unreal. Audiences now are conditioned to the realistic theatre; they are used to empathizing with the characters in front of them, who, no matter how intellectually they try to present themselves, are still real people onstage.

The narrator in storytelling, however, is an actual character. Not only that, but it is

Friend Cooper, of local storytelling company Stories With Spirit, doing what he does best.

the only character. There is only one actor for all the characters in storytelling, not one for each. And, no matter how good the teller is at character voices or physical work, that one teller is all the audience sees. Certainly a professional, polished teller can do very well at making each character she portrays different from each other and the voice of the speaker in ways that are stunning, and with a little imagination, an audience member can feel as though he were transported to the realm of the story. But, between each snatch of dialogue comes the voice of the narrator, describing scenarios and commenting on the action (often inviting the audience to comment too, not only in their minds as Brecht wanted, but actually out loud in the form of audience participation). That is, the one character of the narrator, or storyteller, presides over all the action and dialogue, and no matter how engaging the teller, there is never anyone else but the narrator on stage. Having one person doing the entire set, movement, and acting for every character and scene makes it impossible for an audience member to suspend his disbelief and think the characters real. The narrator is physically there and omnipotent in storytelling, so an audience can distance itself from the plight of the characters with more ease, and can more readily comment on the story as a whole instead. Also, as an acting practice, the characters in storytelling are (hopefully) believable, but brief, and interspersed with narrative which is non-matrixed. So the storyteller uses swifter means for getting at her character than an actor would: she uses body and voice work mostly, working from the outside in, not the inside out as in Stanislavsky’s method.
That, in a paragraph, is what storytelling is about. But suppose we help Brecht and discover why his alienation fails while the techniques of a librarian bring large, loud audiences to hear stories every week.

Reference: “The Adventure of Black Peter” (canon original) shares a few components with this ep: 1) there’s a pirate called Black Peter;  2) some of the evidence in the central murder case involves blade strikes strong enough to go through the body, implying a very strong arm. In the story, the body is pinned to the wall with a harpoon. In the ep, it’s deep sword stabs. (Also: remember the scene in Sherlock ep. 2.2, with Holmes coming home, blood-covered, harpoon in hand? That’s nearly directly from the original);  3) a subplot involving a log book and someone named John Neligan, intertwined w the murder scene but not a cause nor an effect.